The Life of Saint-Sergius of Radonezh

The site of the hill was named in honor of Saint-Sergius of Radonezh because the premises of the Institute were purchased in 1924 on the day of the ecclesiastical feast of this saint, that is to say July 18. He is one of Russia's most popular saints. He was a great spiritual and monastic reformer, wonderworker and protector of medieval Russia.

Baptized under the name of Bartholomew, the future Saint Sergius was born on May 3, 1314 (according to other sources, 1322) in Varnitsa, near the city of Rostov. When he was seven years old, the child was sent to study but he experienced great difficulties. One day he saw an old monk under an oak tree, who was praying. Approaching and waiting for the end of the prayer of the starets, he asked him to pray so that he could study normally. The monk prayed for him, then assured him that from that day on, he would know how to study. That same evening he read the Office of the Hours. The starets before separating, pronounced these enigmatic words: «This child will become the residence of the Holy Trinity, and will bring a multitude to the understanding of His will». 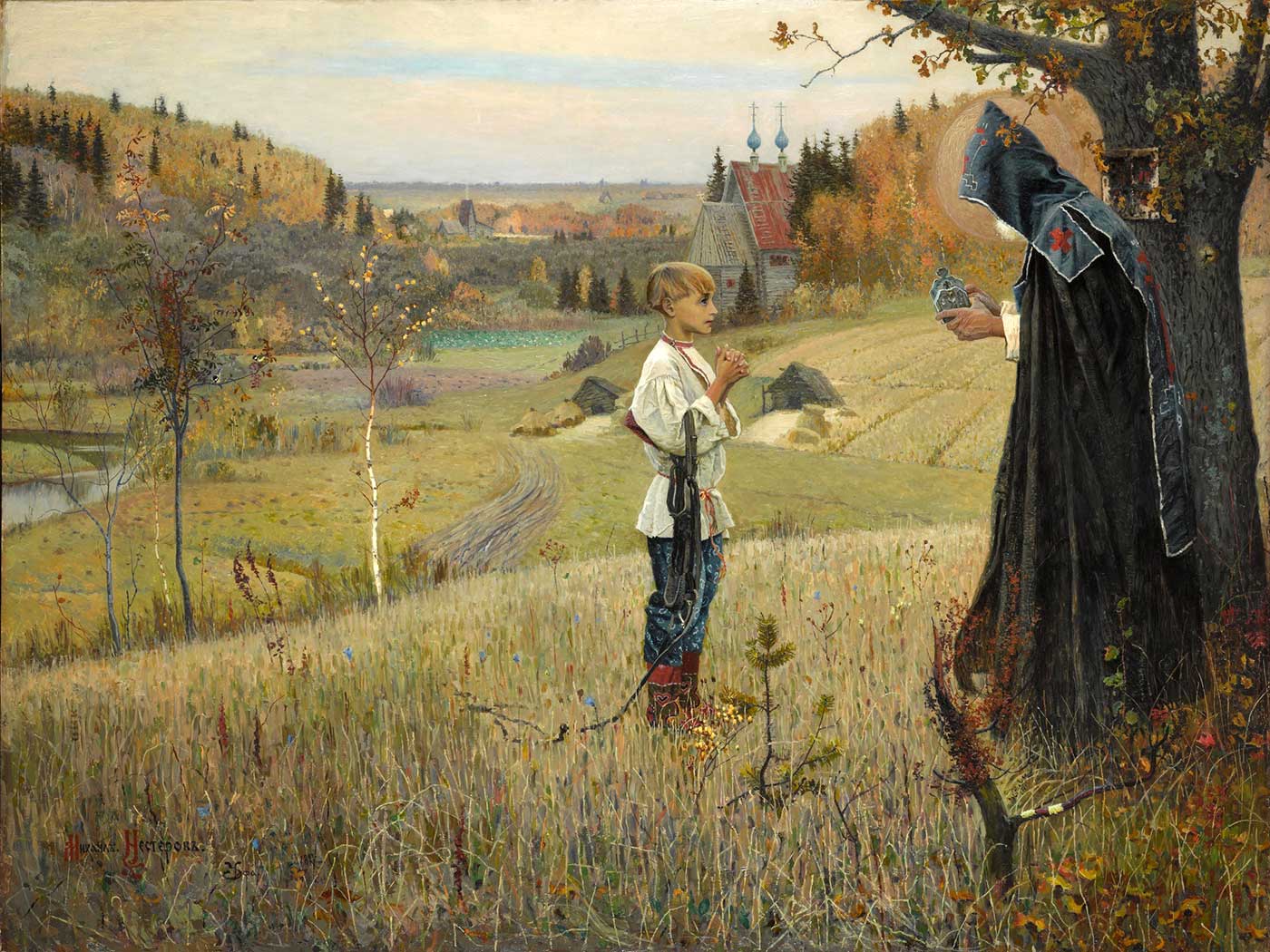 A vision of the boy Bartholomew

After the death of his parents, his older brother, a widower, became a monk at the Khotov monastery. Bartholomew, who wanted deep solitude, convinced his brother to look for a place that would be suitable for ascetic life. They walked through the forests, then found a place with a water supply and far from the beaten track, near Radonege and Kotov. There they built a hut, with a chapel which they dedicated, remembering the words of the starets, to the Holy Trinity, which was an innovation. It was there that he received, at the age of twenty-four, the monastic tonsure with the name of “Serge”. Serge remained a hermit in this solitude for three years, his only books being the Psalter and the Gospels, and his only neighborhood being the wild animals of this forest. After this period, other people began to join him, attracted by his burgeoning reputation as an experienced spiritual father. In 1354 Serge was ordained a priest and officially became abbot of the small community. The community of a dozen members grew rapidly. Following a beginning of revolt against his authority, Serge left the monastery and settled in Kirjatch.

While Russia was being invaded by the Tatars, Serge took part in “political” missions to promote the recovery of the Russian nation. He had also made his monastery an intellectual center, endowed with a good library. In 1380, Prince Dimitri Donskoy questioned Serge, to ask him if he should enter into resistance against the invader. The monk urged him to defend his people and blessed him. At the time of the battle of Kulikovo, which was the beginning of the deliverance of Russia, Sergius was praying.

Serge de Radonège and André Roublev are known to all those interested in Russian spirituality and sacred art. Reformer of religious life, charismatic saint protector of Orthodoxy and the Muscovite dynasty, Sergius is above all the founder of the abbey (Lavra) of the Trinity which, since 1342, has been one of the beating hearts of the identity Russian. It was for the ornamentation of the abbey church of the monastery, built between 1422 and 1427, that Rublev painted the famous icon of the Trinity, undoubtedly the most diffused medieval Russian image in the world. "To understand Russia, you have to understand the Lavra, to penetrate into the Lavra, you have to study its founder with the greatest attention" wrote in 1919, Pavel Florenskij, intellectual and religious, monk and engineer, mystical defender of an ideal synthesis between cenobitism and communism. He added that if the famous icon of the Trinity is, of course, due to the brush of Rublev, its real author is Sergius, who knew how to regenerate the monastic movement in Russia.

A few months before the end of his life, Serge withdrew from the higoumenat and from “public life” to devote himself once again to prayer in solitude. He died on September 25, 1392 and was canonized in 1452. The Trinity Monastery subsequently took the name of Trinity Lavra of St. Sergius and remained a focus of spirituality even during the Soviet period. 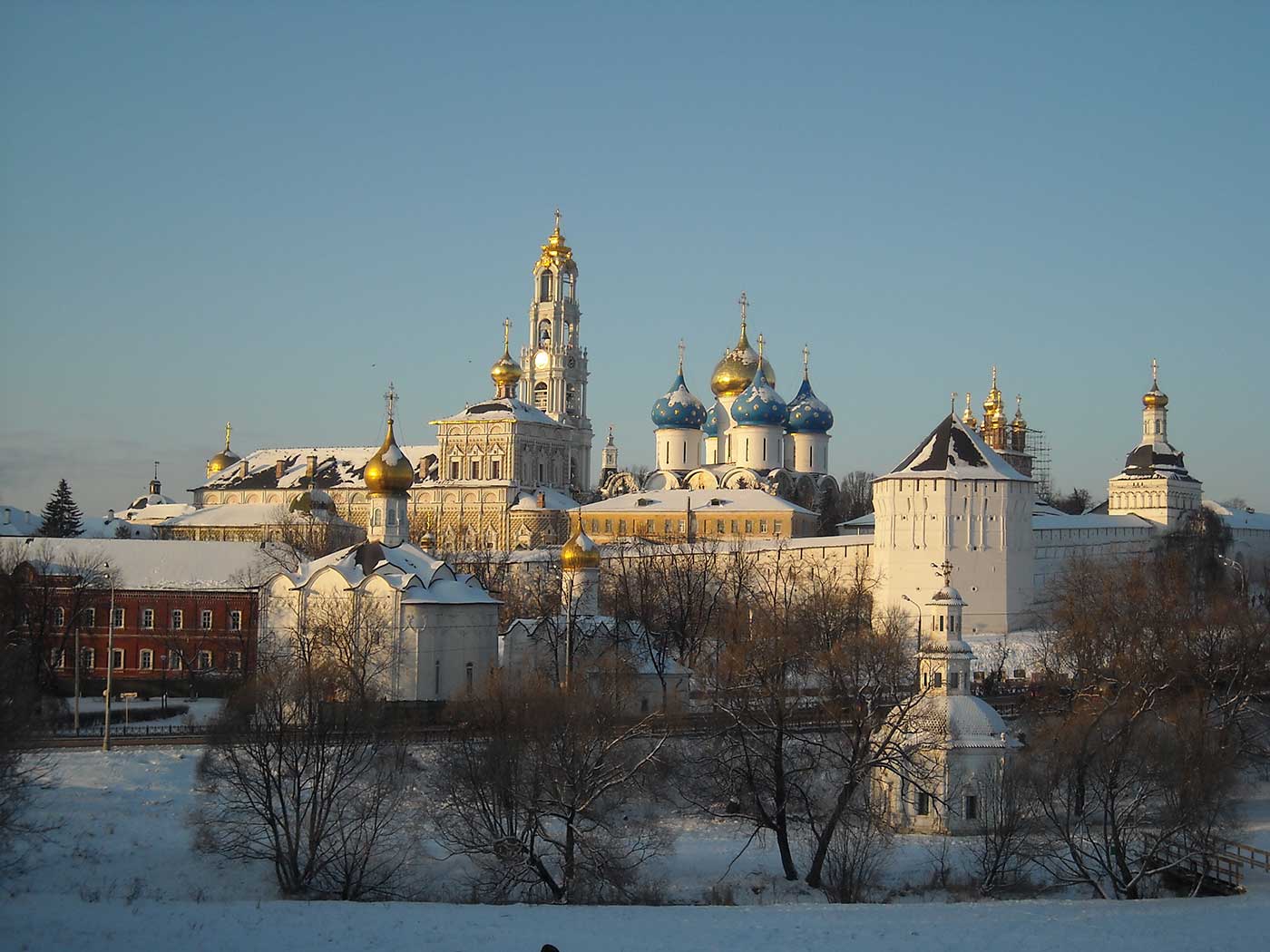 The Trinity Lavra of Saint Sergius